The allure of flowers is well-documented in poetry, prose, art, and in my own creative pursuits. And so, it should come as no surprise that I would combine my passion for food art with floral design. Factor in a bit of food coloring, a Seattle Juneary afternoon, and a pile of processed meat and you end up with meat bouquets. And interesting enough, I just realized that I’ve been waiting my entire life to use “meat bouquet” in a sentence.

If you want to make your own meat petals, here’s what you’ll need:

Ignore the bacon and bologna in the photo as I wasn’t able to use either. And if I never ever never touch another piece of bologna, I’ll be happy. The texture of that pink-slime-based food is disgusting.

Not one to be easily deterred, I filled a pint glass with green food coloring and water. This approach worked well for the salami leaves [ed note: the meat and the fat pieces that make up salami become unappetizing when colored green], but the concentration of dye wasn’t enough to color the hot dogs as vibrantly as I wanted. In the end, I put the hot dogs stems on the tray and poured food coloring all of them before rubbing it all over them. Sadly, my palms were as green as the hot dogs, but this allowed me to truthfully state that I’d been giving handjobs to leprechauns. 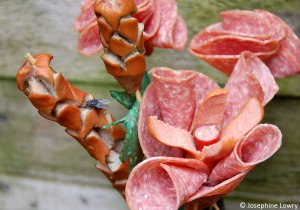 Once I had the stems ready, I began to assemble the flowers. However, room temperature + excessive handling of both the salami and the pepperoni (blech) made my hands too too greasy, so there aren’t any shots of the assembly process. Essentially, I shoved the hot dogs onto the skewers, then put one of the lil snausage things on the end. From there, I placed slightly-trimmed pepperoni (or salami) in a circular pattern to create a petal effect. I attached the pepperoni with toothpicks that I’d cut in half. Once I had 5-6 petals attached, I carefully bound it together using twine.

Overall, the process was both tedious and gross. And as someone who loves salami and pepperoni, it’s going to be a long, long while before I crave an Italian sub or a pepperoni pizza. But artistically, the results far exceeded my expectations. And when a fly landed on the meat petals, I was thrilled. Grossed out, but definitely thrilled. MEAT PETALS! ;